To be honest, this Summer I've not been doing too much cycling. Part of the reason for this is that her worshipfulness has been flat out busy with the day job, and our two little Monsters really haven't wanted to do too much riding this year. Oddly, for a guy who likes his bikes on the beach cruisery side until I bought this Apollo Retro I've not even touched one of my beach cruisers since February! This is no good, and so with our two little Monsters back at school, I decided to rectifiy the situation by not only riding this Apollo Retro beach cruiser, but by taking it to the beach to do so.

Now then, last year when I bouhgt myeslf the Bikini Hurricane, Mrs Clint decded that she too wanted a Beach Cruiser of some sort because then we would all have one each. So I went out and eventually found for her an Emmelle Bondi Beach. I'll admit that it's possibly not the best Beach Cruiser I've ever come across, but I thought that for the Summer atleast it would tide her Worshipfulness over, and she could indulge in a bit of beach cruising with the rest of us. To be fair to her she did appear to be enjoying herself, however for me, I thought that I could find her a better one. So, with my littlest Monster having a bit of a growth spurt I decided that I would give her Mrs Clints Emmelle Bondi Beach, and I'd find something a bit more like my GT Dyno Glide for her worshipfulness. Back in February I managed to find her what I thought was quite a smart beach cruiser in the form of an Ecosmo Classic, which she still hasn't had time to ride.

So, with our two little Monsters at school I thought that this would be the perfect time for me and the Apollo Retro to take Mrs Clint and her as yet unridden Ecosmo Classic to the beach for a little bit of Beach Cruising fun, and to have some Fish 'n' Chips on the beach. 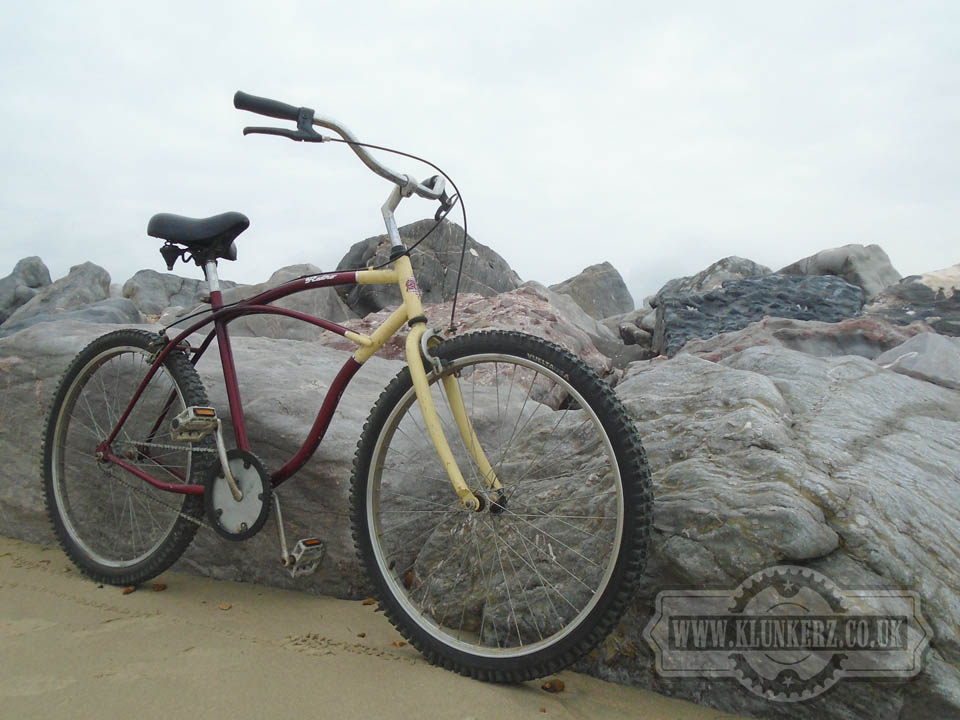 Unfortunately however Mrs Clint had other ideas, much like the rest of the Summer she had to get her nose to the grindstone, and work. It does seem to me that the folk that poor ole Mrs Clint works for really do get their moneys worth out of the hurculean effort that her Worshipfulness put in. Whereas myself, and our two little Monsters unfotunately got to miss out on having her with us on our little adventures.

So, much like the rest of the Summer I found that once again I would be on a solo mission, and this also meant that Mrs Clint still hasn't given her Ecosmo Classic a go... Yet. 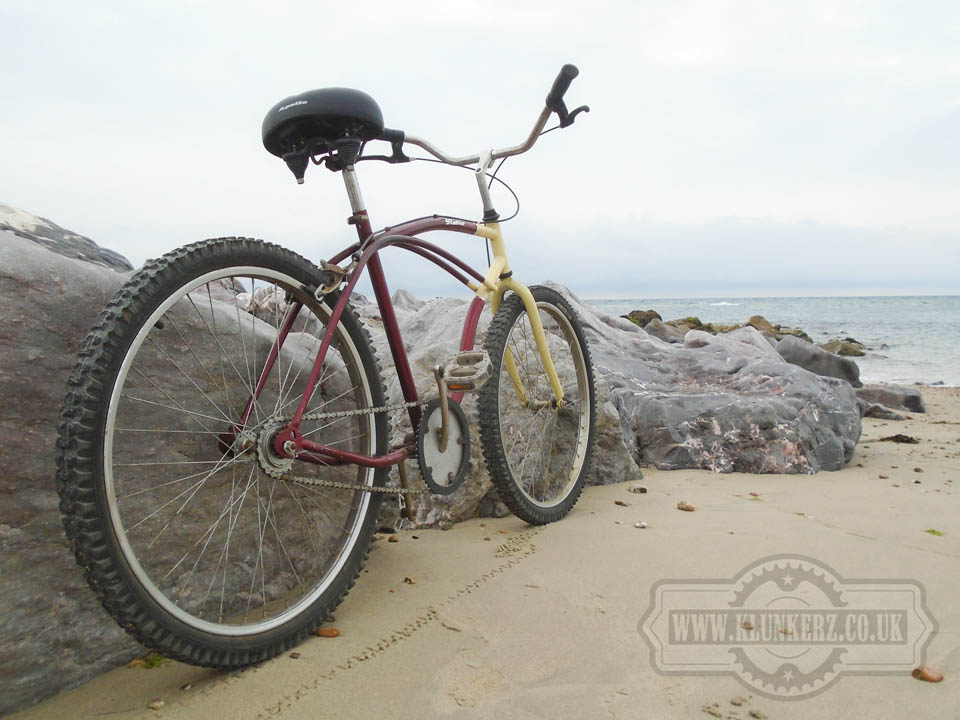 The thing was, I didn't really fancy having a solo mission to cruise along the beach path on my Beach Cruiser like 'Billy No Mates' I've been carrying out little solo missions all Summer long due to Mrs Clints long working hours. So I decided that I'd see who was about to come out and play. Sadly, due to it being a work day playmates were actually quite few and far between. I found myself with just two options. The first one, a woman who Mrs Clint always refers to as my 'Girlfriend', however, that being said I'd just like to point out that despite being what Mrs Clint calls her, she is not my girlfriend, we just hang out a little bit and have been friends a real long time. But due in part to Mrs Clint working all the hours dog sends we have been hanging out quite a lot this Summer, and I think it's starting to irritate her worshipfulness. So in the end so as not to irritate Mrs Clint further I elected to go with one of my two little Monsters friends mum who happened to be free. But there was a problem, despite liking to ride, she had no bike of her own, and so... 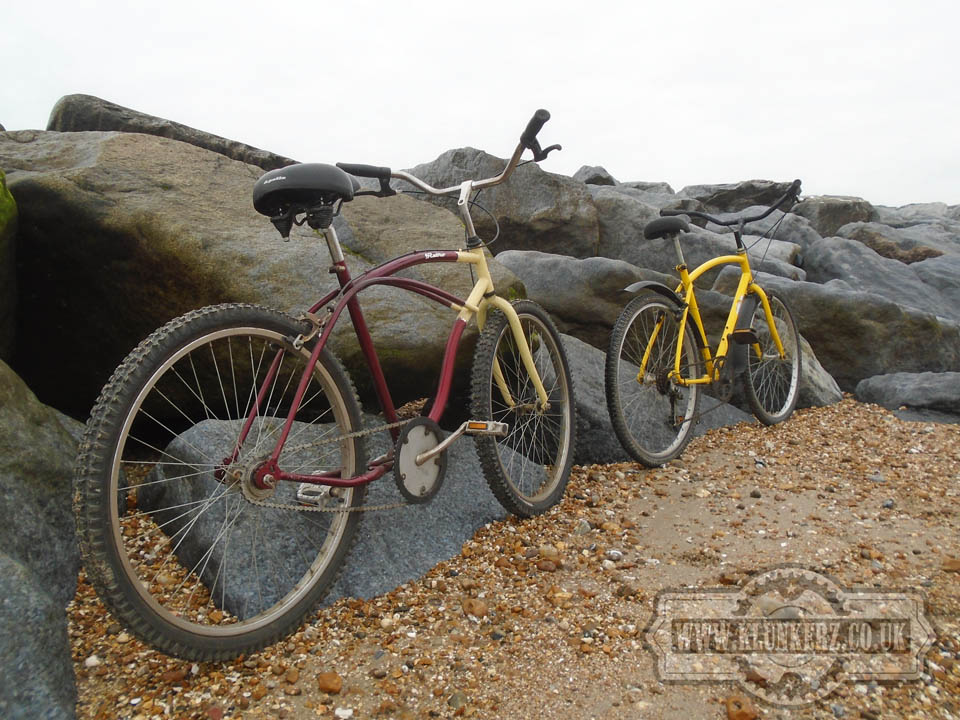 I thought that the best thing to do would be to let her ride the Peugeot Swan 20. But more about that in the next episode.

Lifting the Apollo out of the back of the Navara it became quite evident that the Apollo Retro is significantly heavier than the Peugeot Swan 20. I have found quite often in the past that Apollo bikes are generally quite heavy, especially these older models. I think that perhaps they're actually built using gas pipe. That being said I also find that they are quite hard to kill. As a child I think I would've done quite well to have had been riding an Apollo bike, I probably wouldn't have needed to have my bikes frame welded up so often. However, out on the beach path the extra weight didn't really matter as I rode along, the path was fairly flat, and as a result I was soon flying along the path at a decent old pace, and despite being a single speed I was soon out running the multi speed Peugeot. I've got to say that it's been about twenty years since I've had an Apollo Retro, I actually bought one of these brand new when they came out, rode it for about two weeks, but then saw the GT Dyno Glide at too good a price to refuse, and so I bought and rode that instead. I never rode my Apollo Retro again, however, I do still have it... Sort of. I stripped it, repainted it yellow, and started to turn it into something more mountain bike like, as I remember it's almost done, has maybe 15 gears, and cheap shock forks. It was less than a year old when I did this, and as far as I know it has been hiding up in my folks loft for the best part of two decades now. Perhaps it's time to dig it out.

Anyway, as for this particular one, well it rides pretty good. I must admit that I don't think that the knobly tyres do it any justice, but then my Bikini Hurricane also has knobblies too, and I kinda like them on that, but as yet I'm reluctant to change anything on this Apollo as so far the ownership of this bike is still up for debate. My kids have not yet decided amoungst themselves which one gets to have this, and which one gets to ride the Emmelle Bondi Beach. I'm not going to hurry them along, because until they do, then this lovely thing is going to get ridden plenty by me, and I'm really enjoying it... Probably a little bit too much!