Thinkin'. When I'm riding I do tend to do a fair bit of it. I probably do most thinking when I'm laying in bed, wide awake night after night listening to the gentle rumble of Mrs Clints snoring, a bit like laying by the tracks at the rail freight yard. Although to be fair while I'm laying next to Mrs Clint snoring, most of my thoughts revolve around the question if she would snore less if she was breathing through some sort of filter... Like a pillow or something? I dunno, but maybe that's a story for another time?

I find that as I glide along on my regular route although I think a fair bit to myself, my thought process is usually interupted by people regularly just sort of stepping out into my path, so the narration in my head is regulalrly interupted by brake, brake. BRAKE!! WTF? Why didn't they see me, I'm flippin' big enough! Before carrying on and thinking, now where was I? As a middle aged fella when the train of thought leaves the station, it's kinda hard for me to catch back up with it.

Anyhoo, just lately I've been indulging in a few late night rides. I like that there's not too many people about, and I like that although I don't have the road to myself like I did in the lockdown, there are far fewer cars to bother me. It's just me, the bike, the silence, and the road. The voices in my head don't need to scream at me all the time to be heard over everything else that's going on around me. I like that, I like that a lot. 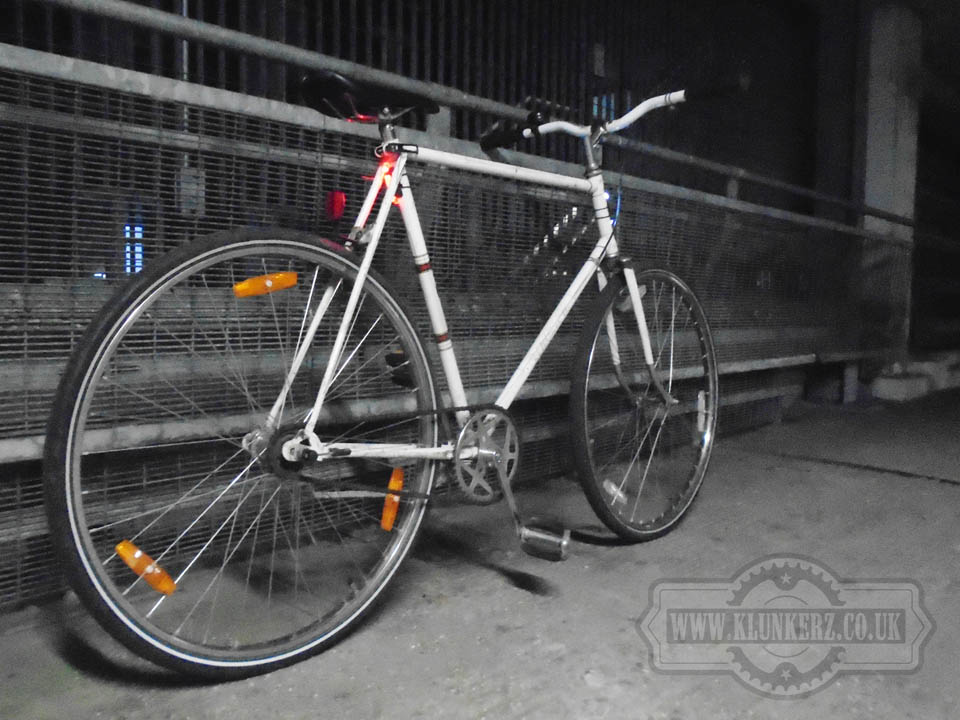 I've had a fair amount of stuff clutting up my thought process lately, and so these late night rides about town seem to be helping me trying to figure out just what the heck is going on in my tiny mind, although, if the truth be known I'm pretty sure that I really don't have a clue, I'm pretty much just winging it through my days, weeks, months, and probably years. But atleast the rides seem to give me some sort of brief respite from the over thinking that ususally happens once I'm trying to get some sleep. Anyway, I'm not going to bore you with other aspects of my averagely average life, but one of the things I have been thinking about when I've been out and about on my late night rides is just how brilliant this bike actually is. I just love it. 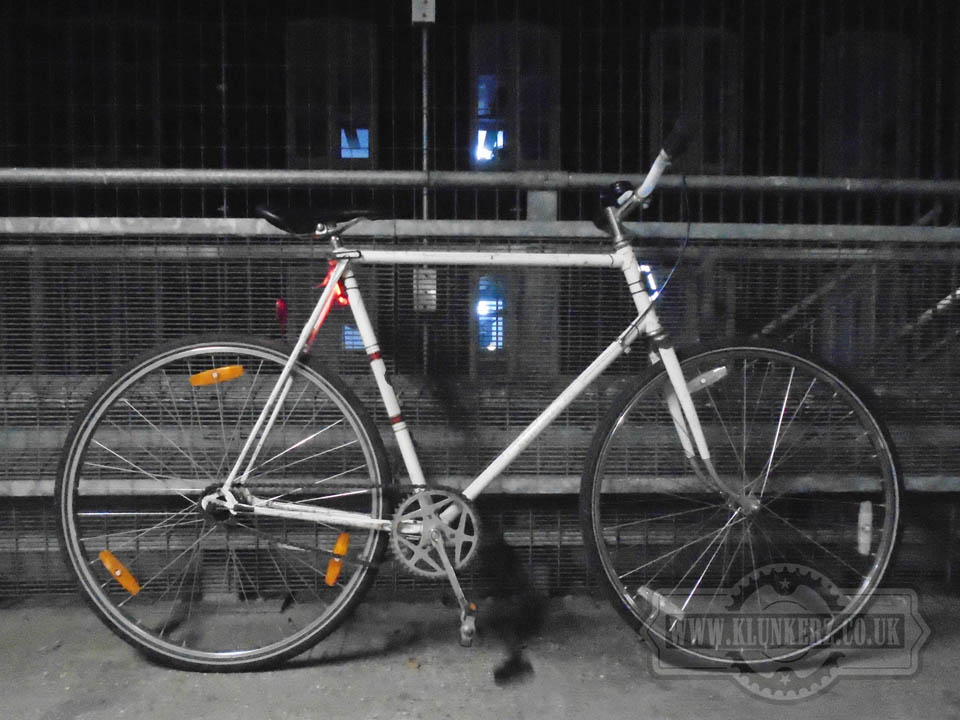 Since putting this together I've been riding this thing a fair bit, and I remember thinking that I would try to build this with the thought being it would become the Kalkhoffs replacement, or atleast a stand in until I manage to find myself another Kalkhoff Weltmeister to ride. I remember thinking that if I ever did find another Kalkhoff Weltmeister, then I would just buy that, and sell this. But, I'm really not sure thats the case anymore, I think this easily rides as well as the Kalkhoff did, infact it might even be better, and I probably enjoy riding it just as much, it's just superb! I usually casually browse fleabay atleast once a week looking for a Kalkhoff, but I think it must've been six weeks since I last looked, and knowing my luck I've probably missed one, but I'm not sure I really care any more. I've got this instead, and it's just epic! 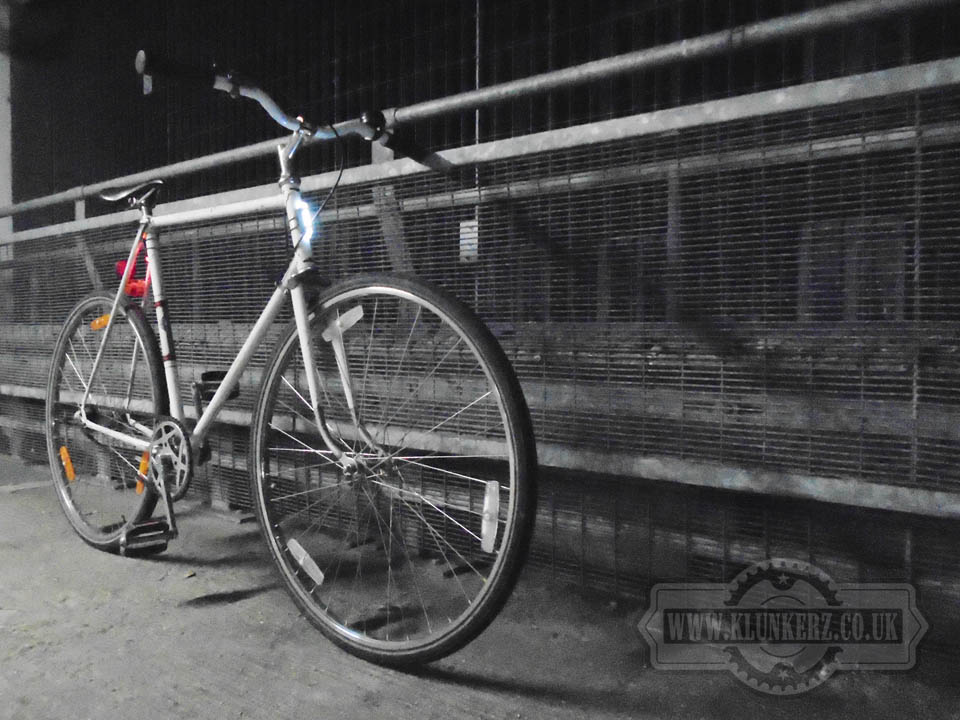 Of course, it might just be a little bit too epic. I mean despite the very unpadded saddle I really enjoy riding it, it's comfortable (umm, enough), quiet, smooth, nimble, fast, I mean this thing just glides effortlessly along the road. It's far FAR better than it looks, it's just brilliant. I'm not really sure I could make it any better to ride, although I could probably make it a bit better to look at, but then someone else might like it and decide to help themselves to it at some point. Needless to say I put a big lock on this when I leave it anywhere, including my back yard. I was thinking the other night as I rode home that I really would miss this bike if someone took it from me, and I was deep in thought as I started to whip past cars on the one way system around the city center where I live. As I was deep in the mine field that is my random thoughts I wasn't paying too much attention to the cars I was passing, and that's when it happened. I was suddenly aware of the flashing blue lights bouncing off the walls around me, and so, thinking nothing of it I figured that some sort of emergency vehicle was trying to come past me, I looked behind me and sure enough there was a Police car, and so I figured that I'd better pull over and get out of his way so he could come on by, but guess what? He didn't. As I pulled over he stopped behind me.

Hmm, I thought to myself, I've had this happen before. As the Policeman approached me he asked me what I thought the speed limit was on this piece of road? I said 20 miles per hour? "Correct" He said, "So, can tell me why you were actually doing 42 miles per hour?" I said that I didn't realise I was even able to get up to 42 miles per hour on my bicycle, pretty impressive for a fat old fella on a bike built in the seventies huh? The Policeman nodded and said really the clue that I was speeding should've been as I passed a Police car. He went on to say that Police cars are usually easy to spot, the big yellow and blue reflective stickers on them is what usually gives them away to most people. Apparently they make them that was so that you see them. I had to agree, I've no idea how I didn't notice it, but like I said, I've had a lot on my mind lately, I was deep in thought, and probably even away with the fairies a little bit too. Anyway, he said that he couldn't really do too much about it, so he let me off with a warning, although he did say that if I did feel the need for speed around the city streets, then perhaps a helmet might be worth wearing. I think to be fair he's probably right, especially as I'm pretty sure that I was going faster than that on the long down hill section before the one way system, so it's probably best he didn't see me there. Although to be fair I didn't overtake any cars there because there were no cars on that particular piece of road, but still, probably not my smartest move. So, helmet has been dug out, and ready for use, but tonight I'll try not to be so deep in thought, not going so fast, and definately paying more attention to what cars I'm passing.