Last year, during the lockdown her worshipfulness, inspired in part by me riding my GT Dyno Glide, and Bikini Hurricane decided that she too needed to have her luxurious ass planted on the saddle of some sort of Beach Cruiser. So, without too much prompting needed I started the search for another bike, and eventually came home with an Emmelle Bondi Beach beach cruiser for her. I've got to say, that I quite liked that little thing, but I felt that when we'd go riding, and I'd be on one of my cruisers I could've done better with regards to Mrs Clints bike. So the search continued, and last February I came home with this... 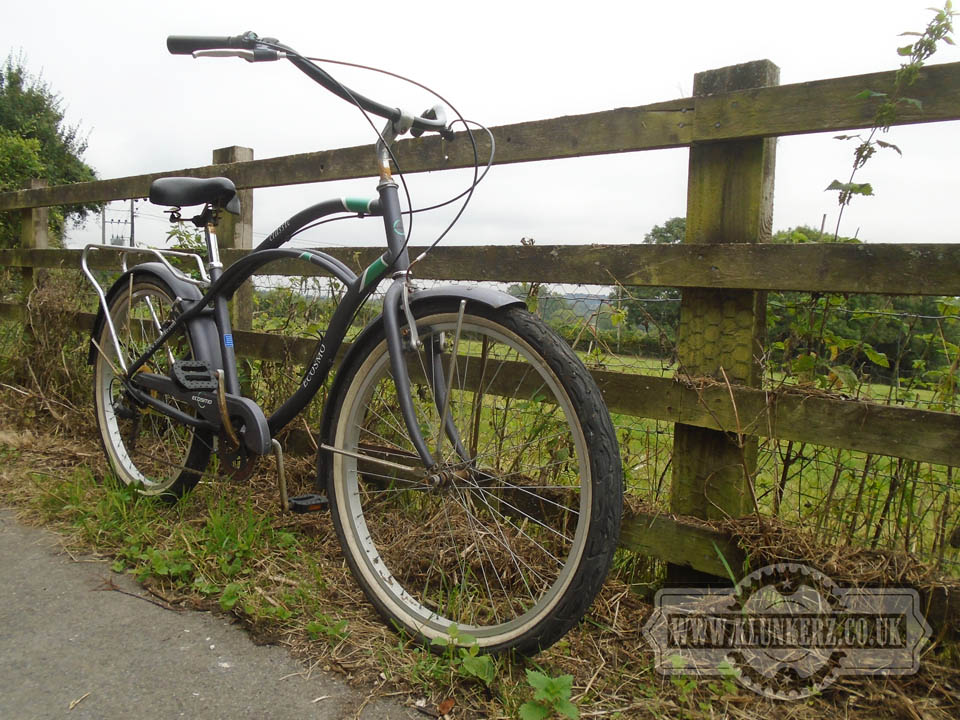 An Ecosmo Classic beach cruiser.... A what? Yep, I dunno either, although I have seen a few Ecosmo Bikes while I've been out and about, although I've yet to come across a store that sells them. But after a bit of a dig about on t'internet it would appear that the Ecosmo bicycle is a British bike brand based in Birmingham, although it appears that all Ecosmo bikes are built in a factory in China. Ecosmo say that this enables them to offer good quality bikes at great prices. However in my mind it looks to me more like they are a Chinese bike brand with UK distributors, but that being said I think that a lot of bicycles, and products in general are not built where the parent company is based, so I guess I'll not hold that against them. My feeling is though that this bike, like many others is probably available not just as an Ecosmo, but probably with many different brand names too. Would I be happier if it was branded as something like a Schwinn, or a Huffy? Probably not, I will pretty much ride anything... Umm, from a bicycle point of view that is! 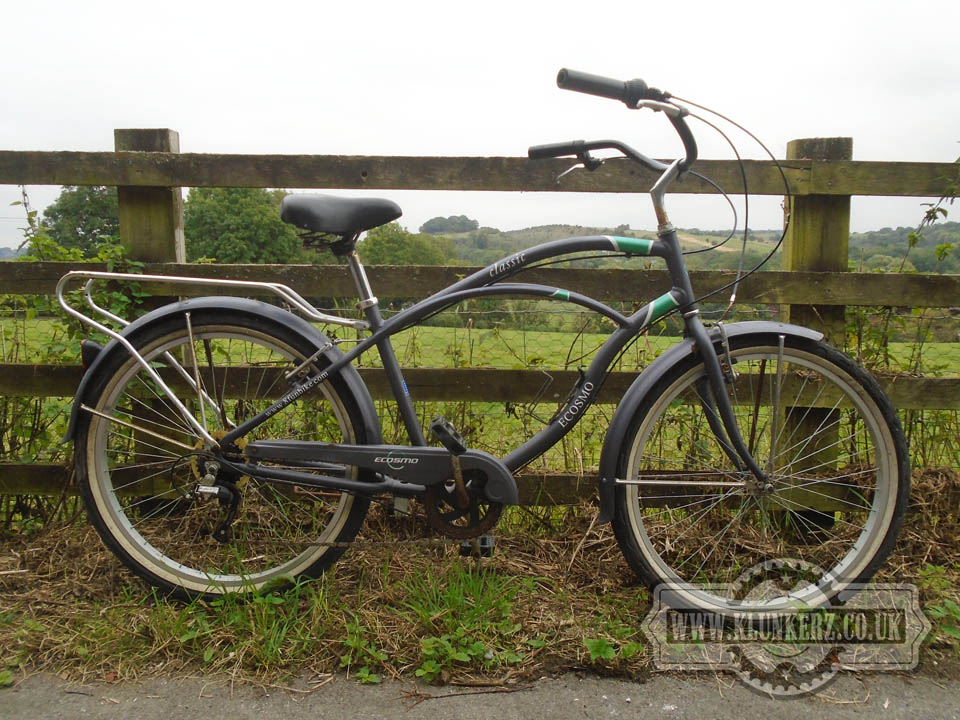 Anyway, according to the blurb that I dug up on t'internet it would seem that all Ecosmo bikes go through robust testing to ensure the customer receives a quality bike they can be proud to own. Am I proud to own it? Well, I've got to say that I'm pretty happy with it, it does indeed appear to be quite a good bike, well built, and quite pretty. Plus, I'd say that the frame is made from aluminium, and despite having a fair amount of steel bolted to it, it's quite light. In comparisson to the Bikini Hurricane it is very much lighter, this should be a benefit to Mrs Clint as it should make riding it easier, and far more enjoyable. In turn this should make my ride when I'm out with her Worshipfulness far more enjoyable too. 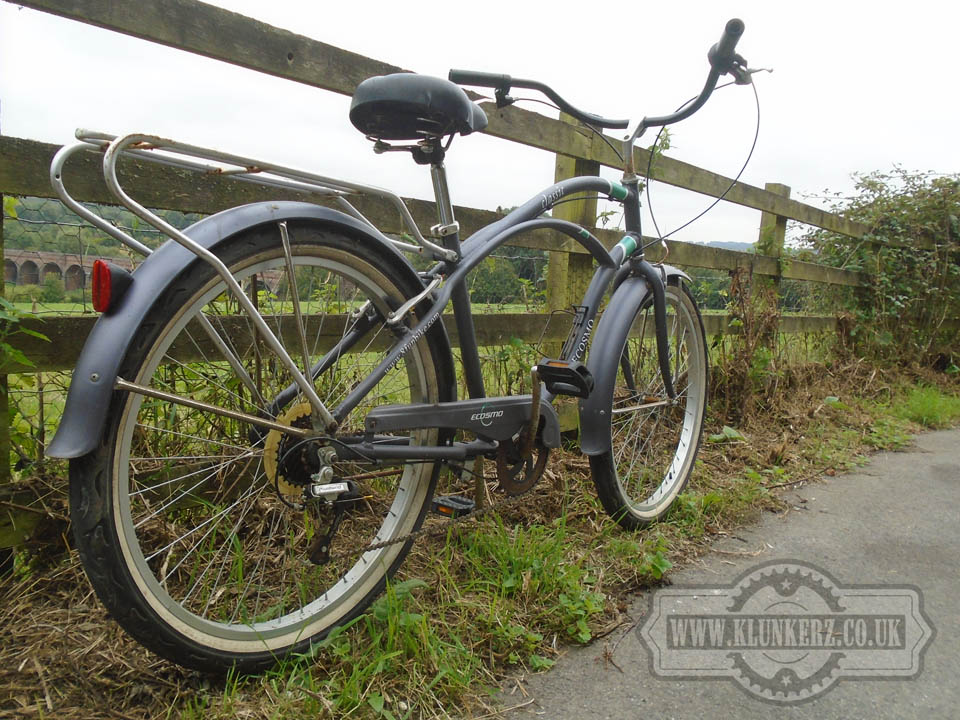 However, there was a problem, not with the bike, but with Mrs Clint. the problem was that Mrs Clint has been so deeply immersed in her work this year that she's not had time to do any riding at all. For ages it seems that she has been all work and no play which makes Mrs Clint a very dull girl. I have been itching to get out there on this, and ride it, but I was determined that I'd not ride it until she has. I didn't want to be accused of buying myself, not just another bike, but another beach cruiser, and so it's just sat there, outside in our back yard amoungst my other bikes just waiting to be ridden. I must admit that every time I looked at it I did find myself thinking that maybe I could just take it out for a little ride just to see what it was like. But with more than enough bikes of my own to ride I thought it would be better for me to leave it, and let Mrs Clint ride it first.

I'll be honest though, I was getting bored of her not wanting to go out and ride with me, because as much as I like riding alone, sometimes I quite enjoy the company. So I waited all through the Summer holidays, she kept promising me that we'd go out riding, then cancel at the last minute because she had to work, or she was too tired, or it was raining, or any of the other myriad of excuses she would come up with. This, as I'm sure you can imagine irritated me somewhat, and so I decided that instead of just waiting to be accompanied by her Worshipfulness on my rides, I might just go out and ride with some of my other cycling friends, rather that carrying on cycling around like 'Billy No Mates'. 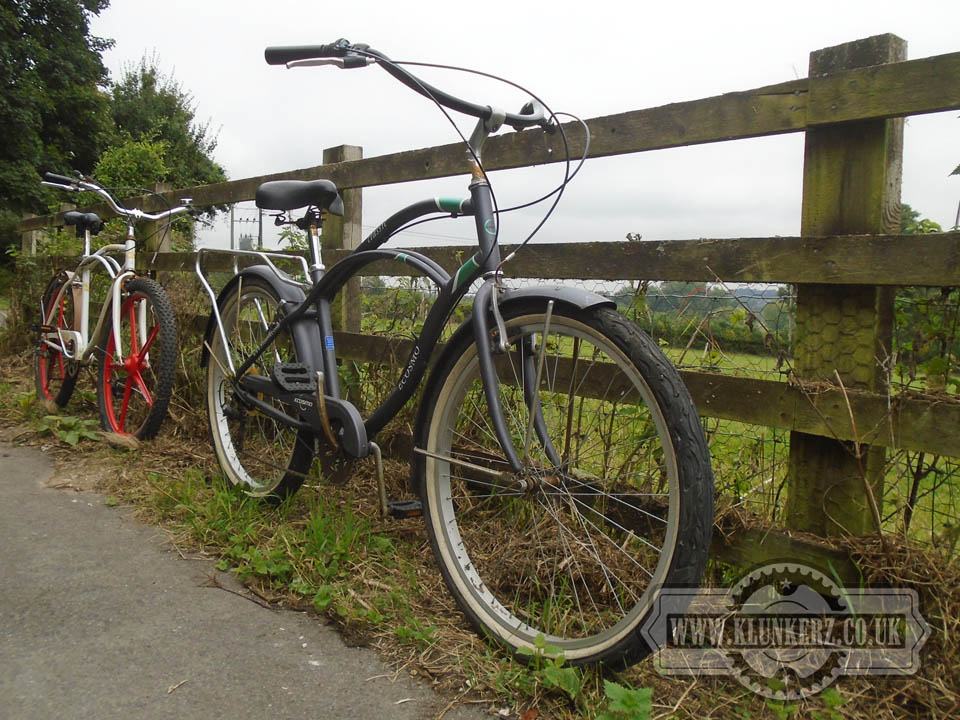 Because I was itching to see what this was like to ride I did for a brief moment in time consider letting the woman who Mrs Clint always refers to as my 'Girlfriend' take it out for a test ride, however as I know her Worshipfulness can be quite funny about letting 'Girlfriend' ride things she 'owns' I thought better of it... I don't want to be under the patio just yet! So I waited and waited, but then last Saturday Mrs Clint announced that she would like to go out riding. I hurried out to our back yard to begin digging it out. It's been there for seven months, and so it was quite deep in the pile, but pretty soon I was dusting off the cobwebs, and making it ready for her to have her first ride.

We headed out, She on the Ecosmo, and me having the first ride of the year on the Bikini Hurricane! It was pretty good, she looked good on it and said she was quite comfortable as we rode along, although pretty soon she said she was getting tired, my guess is this was because she's just not been riding for the best part of a year. But she suggested that we might stop somewhere, and get some lunch. I've got to admit, that I'm always ready to stop and eat, and with the thought of a free meal I was more than ready. As we pulled up outside a pub for a spot of lunch I gingerly asked her if she was buying? She just looked at me and said, "No, why would I be buying?" I said that she would need to buy because my thin wallet was at home because I was thinking we were just going for a ride, and not out to eat. Well, she said no more, and we cycled off home.

Once we got home I asked Mrs Clint as she made lunch how she enjoyed her new bike? She said she would enjoyed it a lot more if I'd have bought her lunch, but she thought it was pretty nice. So I asked her if she fancied another ride the following day? To which she replied that she would be up for it as long as lunch would be purchased by me at the pub on the way home. I felt that if she was prepared to ride again I could probably do that, even though I felt that it would do nothing for either of our weight loss programs, although by some miracle I didn't say it, I only thought it. I guess I'm growing, or at the very least, learning!

The following day, despite Mrs Clint complaining that she felt like the saddle was still wedged in her bum (It wasn't, I'd had a good look the night before) we headed out for our ride. Again, a pretty good ride was had, and as I had been instructed to bring thin wallet (the only thing about me that is thin) a pretty good pub lunch was enjoyed too. As we sat there enjoying our food I said to her Worshipfullness that I felt like I would ride her bike home just so I could see how it rides. But she informed me that under no circumstances should I ride her bike, as it's her bike, and not mine. So I guss that's that... Except, you know it's not, she's ridden it now, and so now I feel the need for me to have a go is even stronger. I'm trying to ignore it, but I know at some point she'll be at work, and it'll be sitting out there looking at me. I'll let you know how I get on!