Okay folks, today's topic of conversation, the Real Easy. Man alive, I never ride this thing! the last time I rode this was the middle of August 2020, I should almost certainly sell it, and several times I have toyed with the idea of selling it to free up some space, and maybe put a little bit of cash back in my pocket. But at the end of the day, despite it being a cheap bike thrown together with cheap parts, I just can't bring myself to part with it. It sits deep within the pile of bikes in my back yard, I can just about see it behind all the other bikes that are leaning against it, and I think to myself that there is something about this bike that I like quite a lot. I can't decide if it's because although its a mountain bike, with the curved crossbar that gives a little bit of a nod to beach cruisers. Or the chunky front forks which seem to give this bike quite a distinctive look. But as it sits in my collection my eye always seems to be drawn to it, I want to ride it, I just cant get to it. 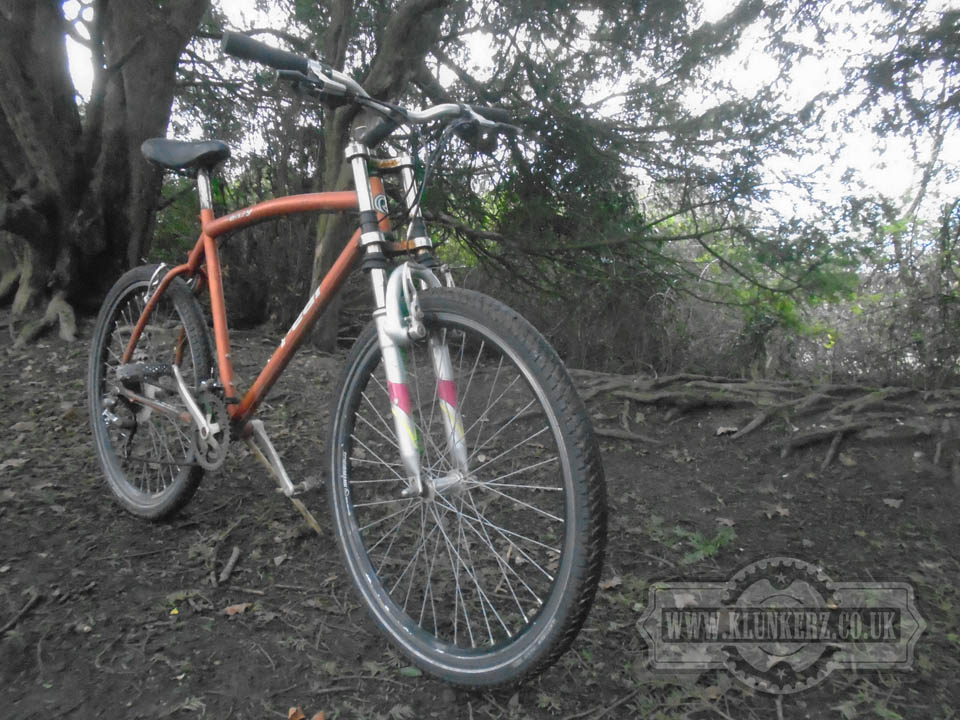 But last week, as I wheeled in the newest addition to my collection I thought, nope, today I ride the Real Easy. I started to move the other bikes, upstairs in BelongaClint, Mrs Clint, alerted by the noise going on in our back yard, leaned out the window. "Are you getting rid of some?" She asked. I genuinely wished that I could say I was, but I laughed back, Ha ha ha, No, I said, That would be rediculous! "Well I'd like to have a garden at some point." She said before closing the window. Hmm, the problem with having a garden means that someone will have to maintain it, and no doubt that someone would be the house elf, me. This also means that if I'm maintaining the garden it's going to cut into my bikes and cycling time, well I'll be honest, I don't like the sound of that at all. I wonder how Mrs Clint would feel if I cleared the bikes from the garden, then concreted the whole thing and just put a tap on a stand pipe in the middle so that I could hose it down every once in a while? That sounds like gardening to me, low maintenance, and, as an added benefit, easy to store bikes on. I have a feeling that my idea of what a garden should look like is probably somewhat different to Mrs Clints idea. I don't think I'll bother trying to run it past her. 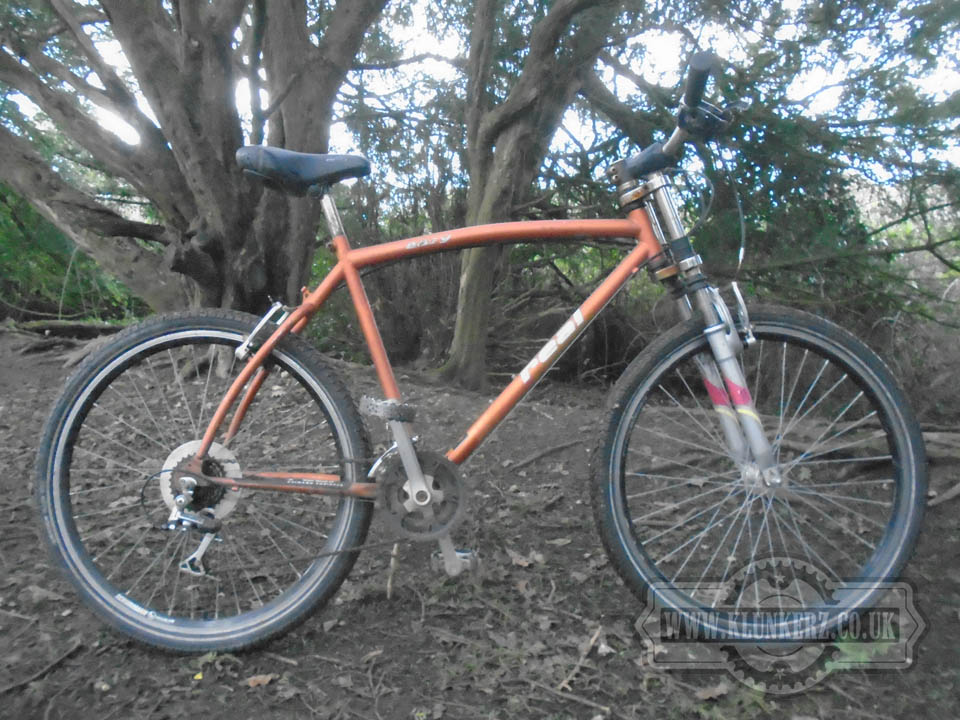 Anyway, twenty minutes later and I was finally there, ready to remove the Real Easy from it's resting spot against the fence where it's been sitting for the last 18 months or so. As I wheeled it out with it's flat tyres, and rusty chain I did find myself thinking that it really is time to set it free so that someone else can enjoy it, but the thing is, despite the fact that I never ride it, I think I'd miss it. I set about giving all the parts that should move a quick squirt of WD-40 before putting all the bikes back against the fence so atleast when I got home I could park this at the front of the pile. This way hopefully it'll encourage me to ride it a bit more often. Well, that was the plan atleast. 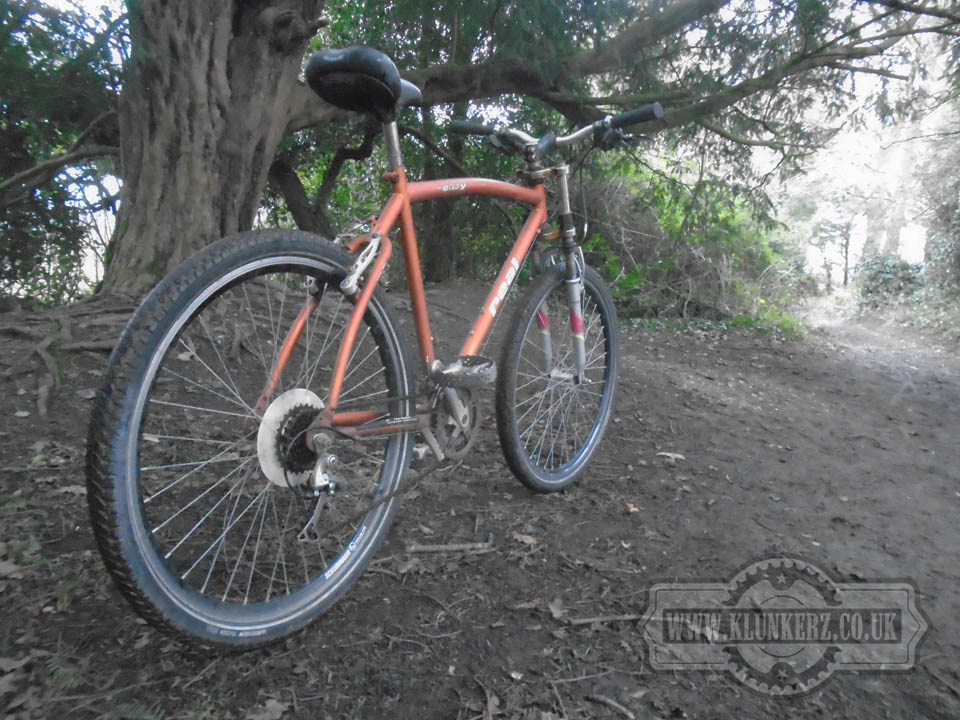 I pumped up the tyres, gave everything another quick blast of WD-40, and headed out. Everything felt free other than the rear brake, I'm guessing that the inner cable had rusted its self to the outer, but hoped that by the time I was at the point where I was going to turn around it might have freed its self up. It didn't, but at the point where I planned to turn around I stopped, parked the bike up, and gave all the moving parts a good squirt of 3in1 oil before heading for home. To be fair to it, the further I rode the smoother the ride was getting as the oil started to penetrate the rusty parts moving parts. It shouldn't be like this I thought to myself. It's got to go, it's far too good to just be sitting in my back yard slowly rusting, and seizing up, only for me to try and resurect it every once in a blue moon. It's got to go, it has to go, I thought this over and over to myself as I rode home, by the time I arrived back home my mind was made up, it was staying! Although it's not staying as it is. I've really got to have a proper culling of my collection, and so for the time being I think that I'll strip this bike to the frame, put it in my loft, and slowly start the collection of parts to build it back up. It's a pretty good bike, but I think if I'm keeping it I want it to be really good, and really nice, so I'm thinking keep the frame as-is, and just clean it up and add shiny new parts. I'm not sure if the forks will stay to be honest, I think I may well put it back to how it was originally. But hopefully when this next sees the road, whenever that may be, it'll be looking like a much more cared for machine. Updates when they occur.