Okay folks, now if you happen to be a long term sufferer of my words of wisdom then you'll no doubt know of my struggle to turn a Diamond Back Topanga that I dragged home from the tip into a bike that I loved and enjoyed riding. Before buying the Topanga I'd never had a Diamond Back, and my guess was that I'd always wanted one due to the film BMX Bandits! I realise that this is obviously not a BMX, but it was still a Diamond Back, and was something I had wanted since childhood. I kept that thing for the best part of two years, and constantly fettled it, but no matter what I tried to do to that bike nothing, NOTHING made it better, everything I did to it only ever made it worse to ride! In the end, out of frustration and anger I unceremoniously ditched the Diamond Back back and the tip and I was done with it, I just swapped it for an old Raleigh mountain bike, and cycled off home on that instead. The thing is, I was so disillusioned with the Topanga that I've not picked up and single Diamond Back since. I've seen loads at the tip, and even a really nice condition Topanga, but I find myself thinking, Nope, don't bother with that junk, and so far I've kept to that. But the thing is, my stash of parts has, much like my collection of bicycles got right out of hand. So much so that this year I have been building bikes just from my parts stash in order to downsize the stash, and if I'm completely honest put some funds back into my bank account. I've even gone as far as to collect bike frames from the tip to turn back into complete bikes, and this is what brings us here... 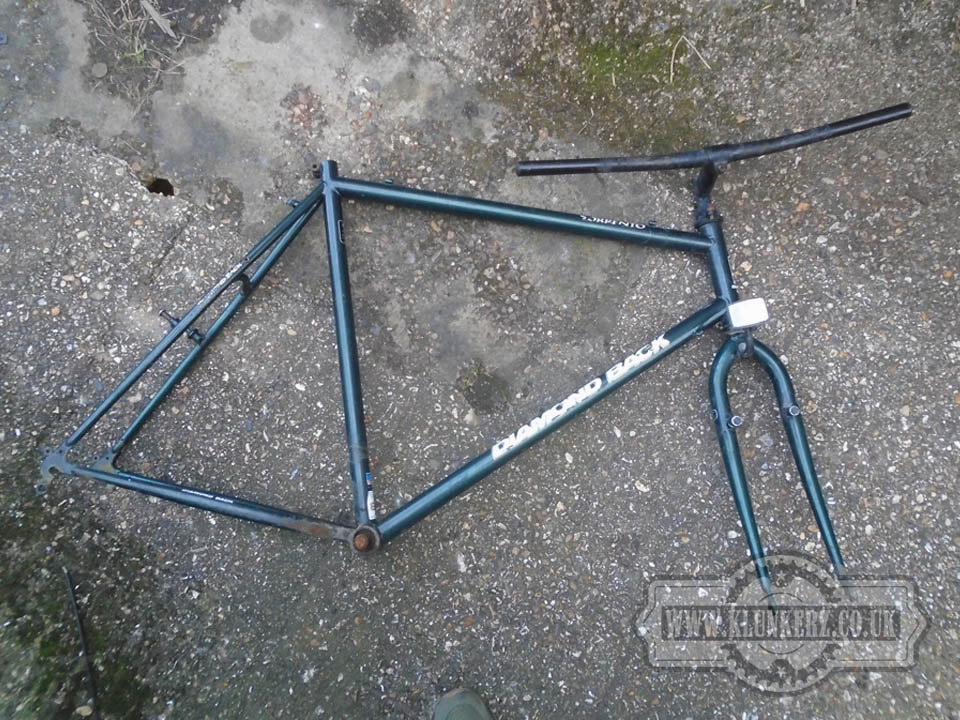 A Diamond Back Sorrento frame that I found at the tip. I saw it laying there right next to the skip and I thought to myself that I'd probably be better off just leaving it there, but then I thought that as I have such a big stash of old and used parts I might as well  drag it home and turn it back into a complete bike. So it was flung into the back of the Navara, and I headed for home, still with plenty of doubt in my mind. 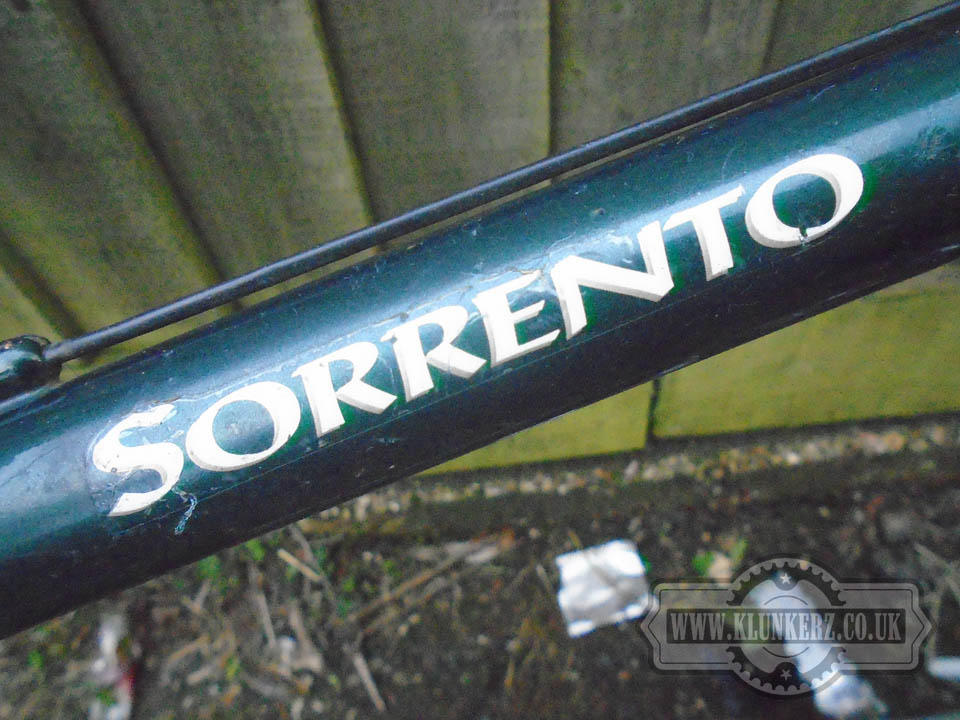 With the Sorrento at home, I waited until Mrs Clint was safely tucked up in bed and snoring like a band saw before I started to give the Diamond Back a bit of a looking over. I still had plenty of doubt in my mind about what my plans for this thing are, but in the end I thought that I was just going to put it together, make it a complete bike, and sell it as a project bike for someone else to fettle at their own leisure. With this thought in mind, and very little else I dug into my stash. Usually when I build I bike for myself I'll carefully dig through selecting all the parts that I think will be good, and work well together on my bike. But, I wasn't building this for me, I was building it to sell, so instead of thinking about what might make it good, I went straight for the box of bits which have all been removed from bikes from the very cheapest end of the spectrum. This is not to say these parts are rubbish, it's just that they all tend to be unbranded parts, and or parts that I just wouldn't use on bikes that I plan to keep and use myself. (Think straight bars, torn saddles, grifter-shifters etc.) I wanted it to be rideable, and complete, but that was as far as my plans for the bike were going to go. 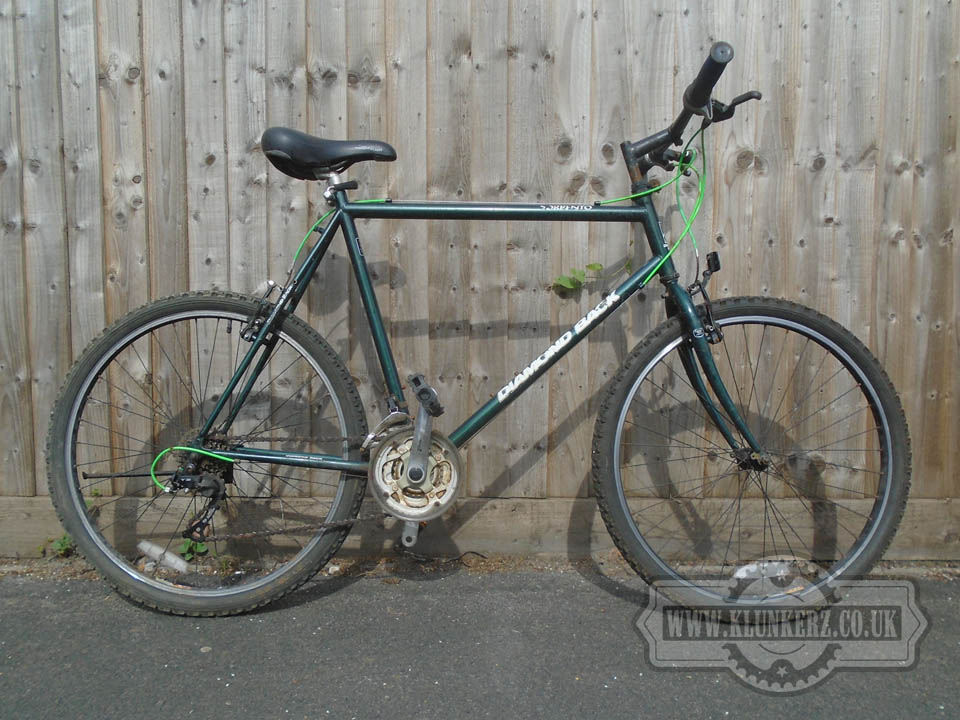 Before long I was looking at this, a complete, although probably far from original Diamond Back Sorrento. As I sat there at 02:00 hrs looking at my complete bike I couldn't help but think it looked pretty good despite being made from crappy parts. I carried it back outside so as not to alert her Worshipfulness to the fact that I had a bike in the house. I figured by the deafening sound coming from the bedroom, and the way that the windows were rattling that she was probably sound asleep anyway, but why take the risk? With the bike dumped with the rest of the for sale section, I brushed my teeth, and headed for bed. As stealthily as possible I slipped into bed, and then she spoke. "Tell me I'm not gonna wake up to a bike in the lounge". I said no, why would there be a bike in the lounge? She rolled over, "Because, I could hear you building a bike in the lounge!" Hmm, maybe it wasn't her snoring I could hear, perhaps there was a freight train going by I thought to myself. But whatever, I had clearly been rumbled, I gave her Worshipfulness a kiss and said that of course there was no bikes in the lounge. Now, how about some 'Relations'? I said. "You've gotta be freakin' kidding me" she said, "It's 2:30 in the morning, go to sleep!" She rolled back over and immediately went back to sleep, or perhaps another long freight train was rolling past the house, I dunno.

The thing was though, I couldn't get off to sleep. I kept wondering what this Diamond Back would be like to ride. To be fair, much like all the other bikes I've built to sell lately I really had no plans to tell you about it as I had no plans to do anything with it other than sell it. But here we are, with a complete Diamond Back that's ready to ride, and I'm pretty sure that I'm ready to ride it. I mean, how bad can it be? No doubt in the near future we'll all find out. To be frank, I'm not even sure what I'm hoping for here, but I guess I'm hoping it'll be good straight off the bat to make up for how bad the Topanga was. But then again, if it's bad, then I'll not have to play with it anymore and can sell it straight away and go back to never needing to get my hands on a Diamond Back again. It should in theory be a win win situation for me, either I love it and ride it, or I hate it and sell it which means I get paid. But it isn't. I've even thought about just selling it and not riding it at all, but I gots to know, and hopefully at some point this week I will know, and so will you guys.